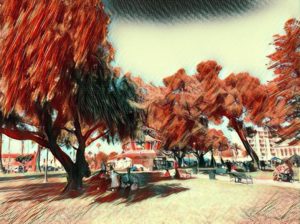 I wrote a post recently praising and thanking Ventura County for its generosity and the warmth it shows to its homeless residents.

I hope to be able to help communicate the feelings from each side of this effort to the other. There really is a lot going on inside of folks. It’s a difficult thing to ask for help, and it’s also difficult to give. It’s complicated, isn’t it?

When you see ‘too many’ homeless folks gathered, remember how many people would be joining that group if not for family and friends.  When it’s said that ‘millions are just one paycheck away from…’, we know it’s true,even if you do not. Many have passed that line and are being helped by family or others, just as it should be.

But many of us have lost our families, or fell out of contact with them, or are otherwise estranged.

I was in Plaza Park on Christmas day, and noticed that the park was dominated by the un-housed, to the extent that residents and other visitors would not enter. A horrific situation, where our mere presence diminishes the life-experience of others. How does it make me feel? Just like you’d think: Sad. Guilty. Terrible.

I also watched a seagull the size of a Volkswagen snatching bags of garbage out of the park canisters and gleefully chucking them into the Santa Ana wind, blowing sideways at the time. Not even checking for food, just setting up the homeless to take the rap.

Now, I’m not suggesting we don’t make a mess–we do. Too many of the homeless, and others, don’t have a respectful attitude toward our environment. God appointed us as stewards of the world around us, and we fail and fail. This behavior is a well-known by-product of depression. Even animals stop grooming themselves when depressed or sad.

As hope dissipates, the daily appreciation of the gifts we’ve been given by God becomes more elusive, less tangible. As we stop looking for them, they become harder to find.

Our minds close to new ideas, and we miss the hints He gives along the way.